If there’s one thing that changes a tank, it’s a shoal of fish. While many fish display some level of schooling, there are others that are just better at it. If you’re looking to add a tight school of fish to your tank, then read on, and I’ll show you some of the best schooling freshwater fish. 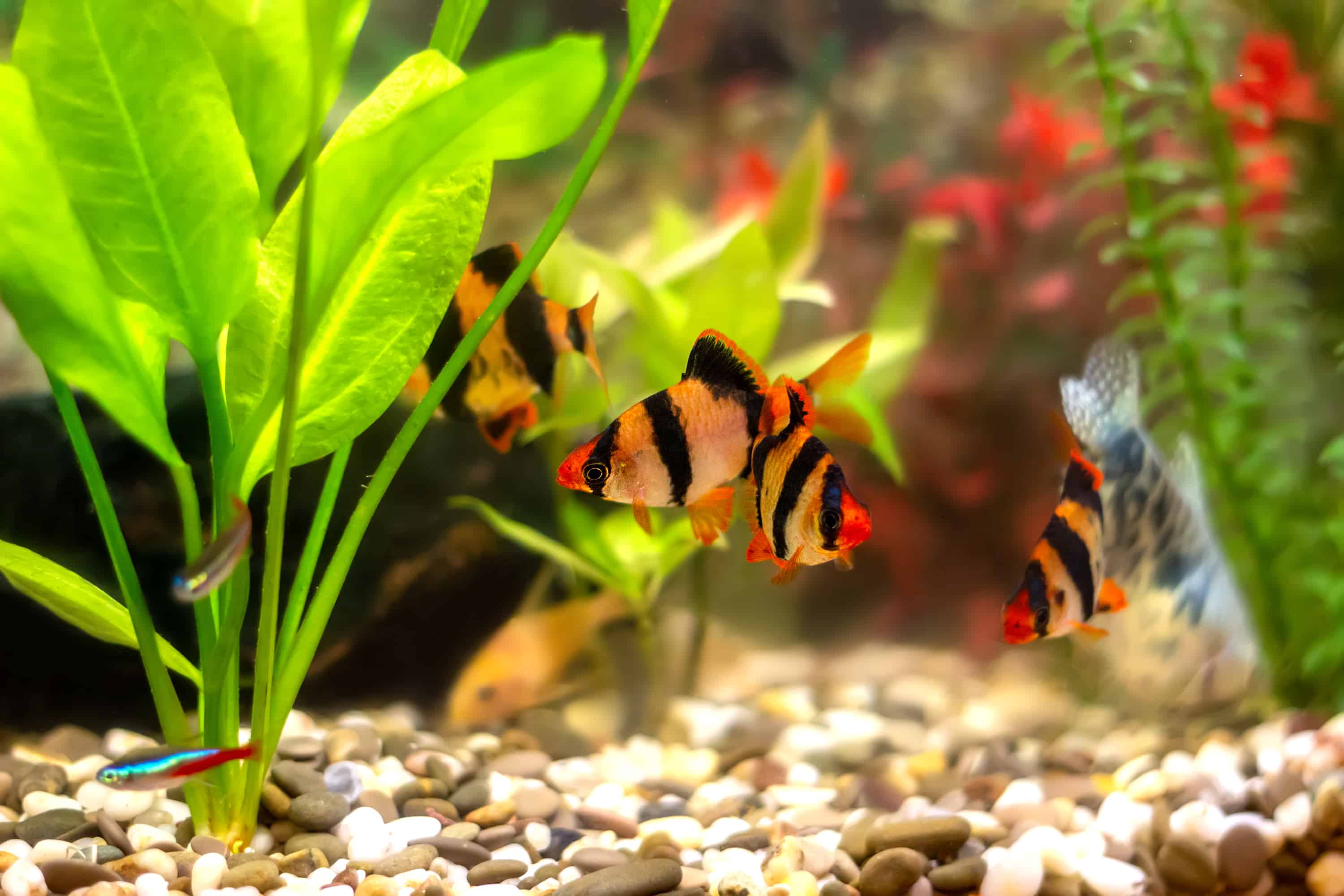 Tiger Barbs are one of the tightest schooling freshwater fish. They tend to remain in formation at the top of the tank. Not having them in a school is a recipe for disaster in most community tanks. Keep at least six of them, and I’d recommend ten or more for the best results.

Tiger Barbs are constantly vying for position within their school. In practice, this means they form an active, dynamic school that’s never boring to watch. Their standard coloration is off-white with black stripes and red fins. Tiger Barbs do have a few color morphs, if you look enough. My personal favorite is the Emerald Green variety.

Tiger Barbs are relatively easy to care for. The problem that most beginners have with them is placing them in a tank without fish that match their temper. Tiger Barbs will nip fins and go after other fish at times, and the fish should be able to fight back.

Note that it doesn’t make them suitable for cichlid tanks or real aggressive fish. They do well with some oddballs, but any fish with them needs to be able to fight back. Long fins are a no-go. A fish like Betta splendens will be torn up in no time.

Tiger Barbs are an excellent option for decorating larger planted tanks. The real challenge in their care is about tank mates, and beginners may have trouble. As a single species in a tank, however, they quickly become one of the easiest fish to care for in addition to my favorite schooling species. 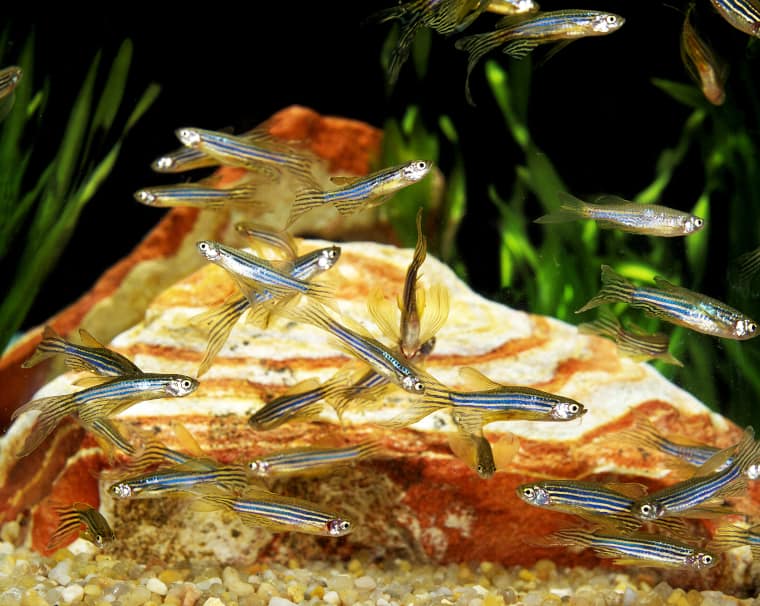 Zebra Danios are another tight schooling fish… when they’re given the right tank. Unfortunately, these lively fish often end up in tanks that aren’t suitable for them. That leads to them abandoning their natural behavior.

Zebra Danios need a long tank. A long 20-gallon tank is a minimum, even though smaller tanks could theoretically host a school. They do best in tanks at least 48″ long, such as a standard 55 gallon.

Given a long tank, they’re very undemanding fish. The cool part for beginners is that the original GloFish are Zebra Danios, so you can add a bright splash of color to your tank. GloFish are identical to their parental fish except for the neon colors.

Zebra Danios do best in tanks that are planted, but it’s not a requirement. They do well with other schooling fish and even some oddballs. Provided they have room, and they’re also able to handle some semi-aggressive fish due to their speed. That said, I don’t advise a beginner to try that out.

Zebra Danios are common, pretty, and do well in schools. A group of six is minimum, but upwards of twelve fish will bring out their schooling behavior the best. They’re an excellent beginner fish for those who want a school. 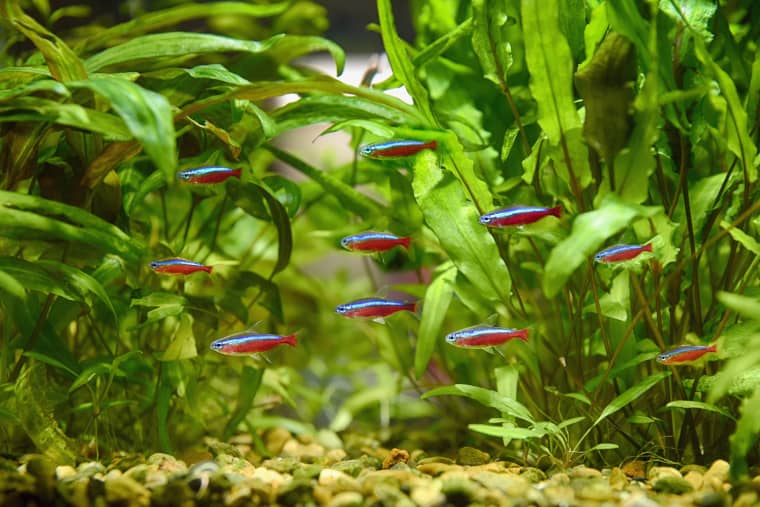 Neon Tetras are perhaps the freshwater schooling fish. They’re seen in all kinds of tanks, from beginners with clown puke to award-winning planted tanks. Even better: their reputation for being fragile is a thing of the past for the most part.

Neon Tetras are quite small, making them a suitable schooling fish for smaller tanks. A 10-gallon tank, for instance, can easily host a school of 6-8 of them as long as there’s adequate filtration. I’d recommend a 20 gallon and more of them, however.

Neon Tetra is an easy fish for a beginner to gauge. Their coloration will fade if conditions are looking bad, but you’ll usually have plenty of time to correct it. The vast majority of Neon Tetras have generations of captivity behind them these days.

They are at their best in large planted tanks, where schools of 30-80 make a magnificent display. They’re still impressive in smaller numbers, but more is better for Neons.

Neon Tetras are a safe choice for a beginner, especially if there are no aggressive fish involved. They’re hardy, cheap, and beautiful. Add in their tight schooling, and you have the potential for a great sight. 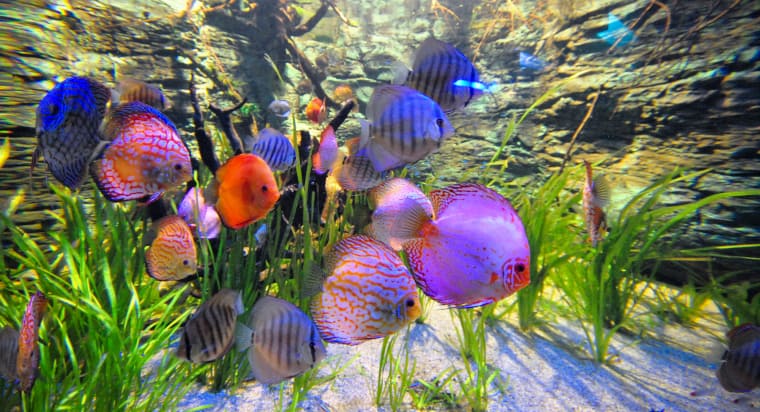 Let’s get this out of the way: Discus aren’t beginner fish. They are one of the most magnificent schooling fish available to the freshwater aquarist. Just be aware that they’re harder to care for than most freshwater fish.

Discus come in quite a few color variations, but they’ll all school together. For such large fish, they do well at staying together, but there are a few issues. The big one is making sure the fish are all similar in size. Fin nipping and bullying may become an issue for significantly smaller fish.

A minimum of 55 gallons is required to keep a school of Discus. A 75 gallon or larger is better. They reach 7″ and are a bit messy.

Discus are very slow feeders, so the fish they can be mixed with is limited. They do best with bottom feeders like Corydoras sp. It’s still popular to keep them with Neon or Cardinal Tetra since it encourages schooling behavior in both. Make sure that the school is small enough your Discus can still compete.

Discuses are one of the hardest and most rewarding freshwater fish to raise. They’re large, expensive, and rather fragile. They’re the ultimate test of your freshwater aquarist abilities, so tread with caution unless you’re sure you’re up to the challenge. 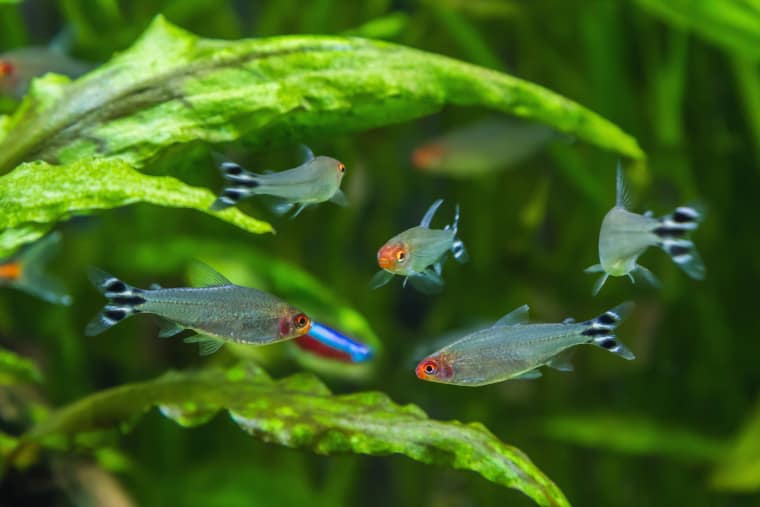 All Tetra school well, but Rummy Noses seem to keep tighter formations than most. On top of that, they have a bold look that gets better with larger numbers. They’re a beautiful fish and an underrated one for planted tanks, in my opinion.

Rummys are quick and can compete with most peaceful fish when it comes to feeding time. They do best in groups of six or more, but I recommend beginning in at least a 30 gallon with 10 if you want to see them in action.

They prefer slightly acidic conditions, so you may want a buffer if you have particularly alkaline water. Plants are also helpful, as their native environment is thick with vegetation, and it gives them a hiding place.

Rummy Nose Tetras are also a good option if you’d like more than one school in a tank. Combined with a group of neons, there will be two shoals moving around, creating an excellent look.

Rummy Nose Tetras are easy to care for and eat just about anything. They’re a perfect fish for the newbie looking to try out some schooling fish, especially if they’re up for just a bit of challenge. 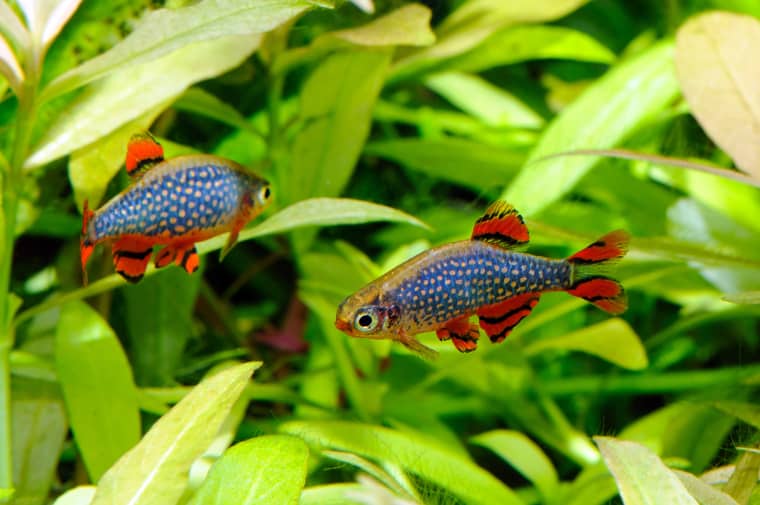 When it comes to schooling fish for nano tanks, you’re mostly out of luck. There are only two top-level fish that do the trick, and I don’t think Endler’s Livebearer’s school tightly enough to really get the right effect.

That leaves us with the Celestial Pearl Danio or Galaxy Rasbora, depending on who you ask. They’re sleek, spotted fish with bright fins. They reach about 1″ at the maximum, which will allow you to keep a group of 6-8 in smaller tanks. 5 gallons is still the minimum for any sort of fish.

Their native environment is small, shallow ponds with heavy vegetation. Since the easiest way to keep a nano tank from crashing is tons of plants, they’re a perfect fit for small tanks.

They’re sexually dimorphic: the males have brighter colors and sometimes red on the belly. Try to keep an even ratio of males to females. It’ll make the whole school healthier.

If you can keep a small planted tank together, you should have no trouble with these fish. I rate them as intermediate because keeping together a nano tank isn’t easy, but the fish themselves won’t be a problem.

These fish are relatively new to the aquarium trade, but they represent an exciting opportunity for small tanks lovers. They may be too small for your average peaceful tank, however. 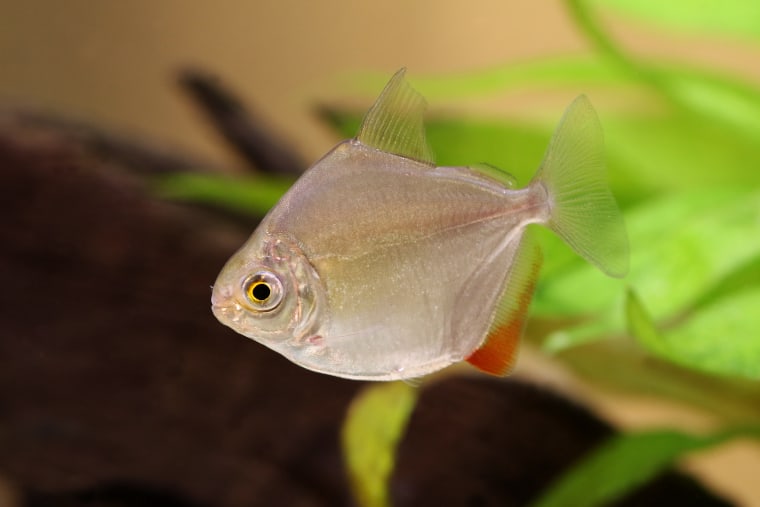 On the opposite end of the spectrum from the Galaxy Rasbora is the Silver Dollar. They’re another large schooling fish with shimmering sides. They’re actually closely related to piranha, but it’s your plants you should be worried about.

Silver Dollars should always be kept in a school. Unfortunately, many of them are bought in the 2-3″ range, and people assume they don’t get much bigger. I’ve even seen them listed as 5″ max in a small fish store.

Assume that your Silver Dollars will hit at least 6″. I’ve heard reports of them getting up to 8″ but haven’t seen any hard proof. 7″ Silver Dollars aren’t entirely uncommon.

They’re easy to care for but need to be fed plant matter. Blanched vegetables are always a good choice, and algae wafers work as a supplement. They prefer a planted environment, but they’ll eat the majority of aquarium plants. Java Moss, Hornwort, and Anubias are all good options.

These big boys are a go-to schooling fish for larger aquariums. If you’re pushing the 80-gallon boundary, they’re an awesome choice. Just be aware that they get bigger than many people admit. 55 gallons is the minimum for keeping a group of 6, so shoot high! 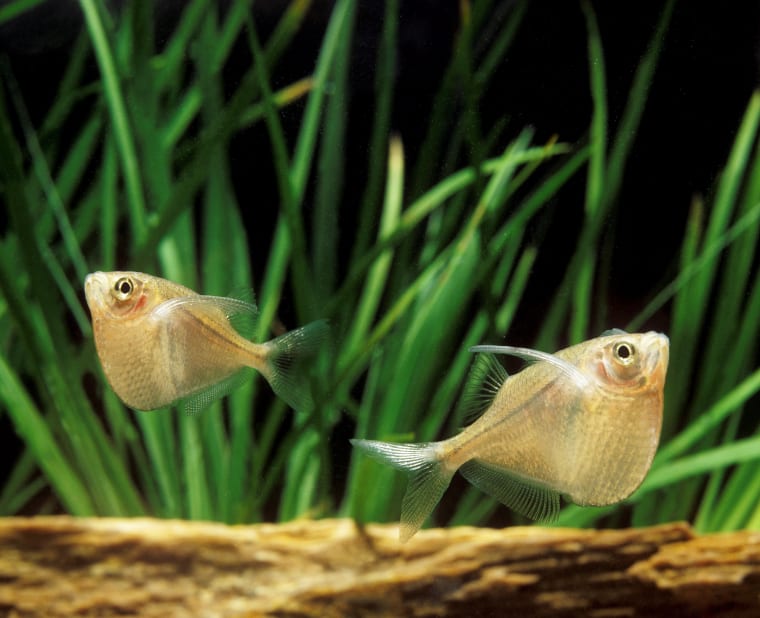 Hatchetfish are named for their deep body, the shape resembling the head of their namesake. They’re quite active fish, and it’s almost impossible to replicate their natural behavior in captivity. They occupy a freshwater niche similar to flying fish, as small and agile predators that take their food from the air.

In the wild, Hatchetfish form huge shoals and leap from the surface to catch water. These are top-level fish in a true sense. You may never see them dive more than an inch under the water’s surface.

They’re one of the few oddballs that school. There are a few different species available, but the Marbled and Silver species are the most common. These reach about 1 ½” in length, but they’re not suitable for very small tanks.

Instead, you’ll want at least a 20-gallon tank to keep your Hatchetfish. You’ll also want to use a canister filter since the tank’s lid needs to be sealed. Any small holes are a potential death trap for these flighty fish.

If you can secure the tank and provide floating food, they’re easy to keep. They’re a unique diversion and fit in well in planted tanks. For the oddball keeper, they’re definitely worth a closer look.

Your Schooling on Schools

The above are some of the best freshwater schooling fish, but they hardly represent the end-all, be-all of species. However, except for Discus, those on this list are all suitable for an educated beginner to keep.

So, which fish species do you think you’ll bring into your tank? Let us know in the comments.