Aquarium lighting is always more complicated than we’d like. The confusion gets even worse when we’re dealing with LED lights, which have different specifications than their fluorescent counterparts. Fortunately, I’m here to help with a list of great LED lights for planted aquaria and a guide to help you pick the right one. So, let’s dive right in!

For those who can afford it, it’s almost impossible to beat Fluval. This light is no exception, and it’s the most advanced light currently on the market. Even better? It’s geared exactly towards plants.

This light puts out an impressive 5200 Lumens, making it suitable for quite a few tanks. This particular version is rated for up to a 24″ tank, and there are larger versions available for those who have bigger tanks.

It comes with a Bluetooth connection, allowing you to program the light from your phone. There are a few presets for spectrum changes, and to mimic specific biomes. The light itself is rated at 6500K, which is close to a full-spectrum light.

It’s expensive, but if you want the best of the best, take a look into Fluval’s 3.0 series. They come highly recommended and can’t be beaten in the feature department. 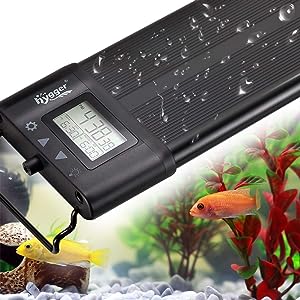 If you’re willing to step away from the big names in the aquarium trade, I recommend taking a look at this light from hygger. They’re one of the best value for money propositions, being a programmable light with a decent output.

The lights run from a touch less than 1000 Lumens for the smallest one to a bit over 3300 Lumens for the longest model. The fact that there’s a size available for every tank is a nice touch, and the price is great as well.

Is it perfect? Not really. The build quality is a bit mediocre, and it’s a little bit difficult to program properly.

For those who are trying to maximize their investment, however, this is a perfect answer. Take a closer look before you spend more money elsewhere! 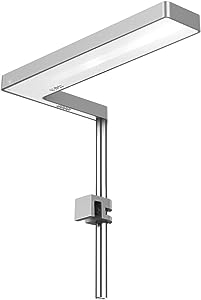 Nano tanks can sometimes be hard to find lighting for. These 2.5-10 gallon tanks are small, with a small footprint, and most fixtures will hang over the edge. That’s not the case here; this overhead LED was made with smaller tanks in mind.

It’s programmable through the spectrum of lighting, and it also offers a considerable 1300 Lumens at the top end of that. That’s enough to grow any plant you can think of in a nano tank. The clamp-on fixture is also low profile and easy to use.

This light is rather expensive for what it offers. It’s also quite small and only suitable for nano tanks.

Still, if you’re planning on running a high-tech nano tank then you should take a closer look. It’s perfect for small tanks, and doubly so for those with light-hungry plants. 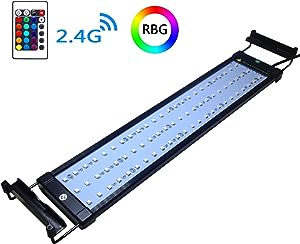 If you’re looking for a fixture for a larger tank, then the largest variation of the COODIA Aquarium Hood Lighting is a great match. It comes with a remote control, which is a nice little bonus, although not on par with my favorite Bluetooth connectivity.

Apart from that, it has all of the advantages of an LED light and a decent rail mounting system for super large tanks. It’s a fairly simple piece of work, but it’s definitely solid.

The main problem is that it’s a little underpowered, 2160 Lumens isn’t a lot for a bigger light. You can double them up due to the moderate price, however. It also lacks some of the quality of life features we see in others.

That said, finding a quality lamp that fits larger tanks? It’s a challenging process. You may need an extra light, but it’s a great solution for those truly large tanks out there. 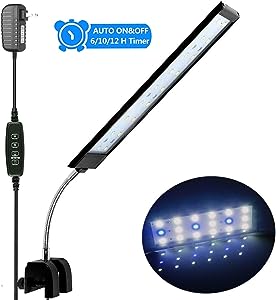 Many of us own integrated tanks, but the lighting is often subpar in them. For that reason, you can find these little supplemental clip-on lights, and this is my favorite of the bunch. It’s cheap, splashes down an extra 600 Lumens, and even has a programmable controller.

As a stand-alone light, this one is only good for tanks at the 3 gallons or under point. That said, it’s out of the way, and you can use it to either spotlight certain plants or to increase the total light in smaller tanks.

It’s not suitable as a stand-alone for the most part. It’s also a bit cheap overall, which is fine if you do not depend on it as the overall source of light in your tank.

Still, in a pinch, this is a good one to have in your toolbox. If you’re looking for something to help with that little nano tank, and don’t want to spend three figures, get a closer peek.

How to Pick the Right LED Light

While the parameters are easy for fluorescent lights, LEDs are a new technology and often require more in-depth research. It’s mostly a matter of familiarity, but you need to look at the following qualities to make sure that it’s the right choice for you.

Intensity of light is the main factor in plant growth. While the color spectrum also plays a part, this is the main thing. If you don’t have enough intensity for your tank, then you’re not going to be able to grow the plants you’d like.

When using fluorescent lights, people often compare watts-per-gallon. This doesn’t work with LEDs since they’re much more efficient per watt than any other kind of light.

In essence: 600 lumen is about as bright as 10W of fluorescent lighting or 40W of incandescent bulbs. So, in theory, a 600 lumen would provide enough light for a 10-gallon tank with low-to-medium light plants such as Anubias sp.or Cryptocoryne wenditii but won’t support things like Ludwigia sp.

All of the rough guidelines are just estimates, of course. What light is actually getting to the plants is another matter, dependent on how deep your tank is.

The following is a rough guideline for lighting using lumens:

Please divide all numbers by 4 if you’re measuring your tank in Liters for the same results.

This is all a bit rough, of course. LED lighting has changed a lot of things, and the way we think about light power input on our tanks is a new one. So far, the above guidelines seem to work “in the wild.”

PAR (photosynthetic active radiation) is another measurement that’s used but has to be calculated on the individual tank. While it seems to be a valuable tool, there’s still some controversy surrounding it and it’s harder to calculate at home.

In general, a newbie can use the above guidelines for Lumens/gallon to get the lighting they need. Advanced tweaking isn’t a bad thing, but it’s outside of the scope of this article.

Light color for LEDs is measured in K, or degrees Kelvin. It’s not tied to temperature, but instead to how the spectrum of light emitted from the bulb is weighted. Not all lights are “full spectrum” and some will have more red or blue.

Indeed, the reason that many people find LED lighting jarring is that it’s full-spectrum or blue heavy, while incandescents that most people grew up with are skewed the opposite way.

Most aquarium lights will fall in the “neutral daylight” range of 5000-6000K. Underneath this, we have “warmer” lighting, which is due to the increased presence of red. Above that lighting, we get closer and closer to natural daylight, with 10,000K being equivalent to a clear sky.

This is largely a personal choice, and I prefer lights on the higher end of the spectrum personally.

Spectrum doesn’t matter much, especially for the amateur aquarist. Pick something you’ll be happy with staring at. As long as it’s powerful enough, you won’t have any trouble with your plants.

LED lights often have varying levels of coverage, depending on the reflectors and position of the lights themselves.

Due to this factor, you need to make sure that the light you’re planning on using will sufficiently cover the bottom of the tank. Otherwise, it’s not going to be helpful as far as your plants growing.

Lights with just a strip provide wide coverage, but it’s not very well concentrated. Others keep the light closer together. The best, in my opinion, run around 120°.

Overly broad coverage may mean that you need to up your lumens per gallon. You may need multiple fixtures as well if the light fixture you’re looking at isn’t large enough for the tank. I recommend fixtures covering 75%+ of the length of the tank.

For tanks under 30 gallons, this shouldn’t be a major consideration, as smaller lights tend to light more than enough for that sort of thing.

You’ll also need to know how the light mounts. Many of us run tanks with full hoods, which can complicate matters when it comes to lighting.

You have clip-on lights, for instance, which are great for smaller tanks but can be a pain if you have a full hood. Others just sit on rails and are best for larger tanks that have a full hood.

Just doublecheck that it will work out for you, and you’ll be in a good place with your new light.

LED lights are already implanted in a circuit board, so almost all of them have some level of quality of life features.

The advanced models can even connect to Bluetooth or a Wifi network so you can operate them from anywhere. Look for the following when you’re considering a new aquarium light:

Every bit counts, but spend some time to make sure you end up with the right light for your needs.

Are Led Lights the Best for Planted Tanks?

It’s up for debate when it comes to planted tanks, but I feel the advantages offered are the best. For those short on cash, they’re also a boon since it’s doubtful you’ll need to replace the light anytime soon.

As far as I can tell… they will. LEDs don’t have the same limited lifespan of CFLs or incandescents due to their construction. Indeed, it’s generally heat, which is the death of an LED bulb in housing fixtures. Your aquarium light is likely to make it to the end due to their lightweight housing construction.

The big one is lower energy costs. In the past, it wasn’t uncommon to use 180W or more just to light a 55-gallon tank, which is something you can do with far, far less energy using LEDs. They also offer a more natural spectrum when you choose a 5000K+ color temperature, which enhances the colors of fish and plants.

Are There Any Disadvantages to Using Led Light Fixtures for Planted Aquariums?

Other than cost… not really. They’re lighter, more programmable, and often come with features undreamed of on the old T5 fixtures right out of the gate. Even the cost of LEDs is coming down, and currently, it’s hard to find a T5 fixture with similar output for the same price as the lower-end LEDs.

What Can I Do if My Led Aquarium Light Isn’t Programmable?

Programmable power strips are your best bet. I prefer things like this, but there are both more and less advanced versions available. They can be a bit finicky, but they’re easy to use for the most part.

Finding the best LED aquarium light isn’t nearly as hard as you’d think, you just need to be aware of the different parameters and options available. For my money? The Fluval Plant Spectrum 3.0 Bluetooth LED Strip Light is the best around, but if it’s too expensive, an appropriately sized hygger Aquarium Programmable LED Light is still a solid choice.

Whatever you choose, just know that a better light means happier plants!