Whatever shrimp you might have in your tank, plants are almost a requirement. They help your animals to thrive and also balance the ecosystem that exists within their tank.

While all plants are good for shrimp, some do particularly well in the same conditions as our inverts. Others provide optimal hiding spaces without hiding the shrimp too much.

If you’re looking for ideas, read on, and I’ll break down some of the best plants for your shrimp. 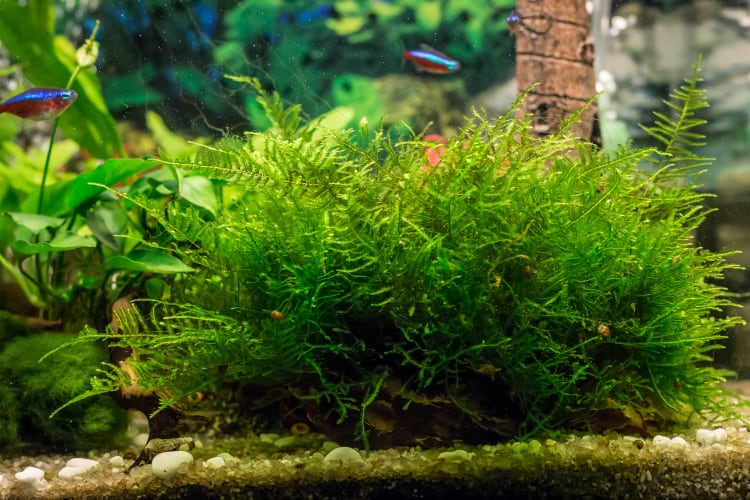 Java Moss is possibly the easiest to grow aquatic plant in the trade. It doesn’t seem to care about conditions, grows prolifically, and is generally a no-pain plant.

It’s also ideal for shrimp keepers. It’s my go-to for running multiple breeding tanks, you can simply drop it in, and the shrimp will breed. For dedicated tanks, it’s much easier to attach it to a piece of driftwood. When the time for culling comes, you can trim back the moss and capture the shrimplets afterward.

Java Moss practically infects aquaria. It’s always there, waiting in the wings, once it’s been introduced. In tanks I’ve removed it from, I often find small amounts growing. It’s tangled in plants, growing up from decorations, and generally not going anywhere.

My favorite part about it is in tanks, which are shared with fish, most fish won’t risk getting entangled in moss, so it provides a great safe haven.

If you’re not into running planted tanks, just make sure every shrimp tank has a handful of Java Moss. There’s no skill required to keep it going great, and it’s picture-perfect for your shrimp.

Cryptocornes are a favorite for keeping shrimp, especially in dedicated tanks. These plants come in a variety of colors, but it’s their easy care and dense stems that are of interest in shrimp tanks.

Crypts need time to establish, but once established, they grow like wildfire. They’re also capable of growing in red, bronze, and green coloration. Most of these depend on the lighting above them; high lighting will bring out more color in the species.

Root tabs, decent light, and CO2 will produce a dense forest in a couple of months. Even low tech tanks will allow the plant to prosper; they’ll just grow a bit slower. If you have your shrimp in a mixed tank with Crypts, then you may want to buy quite a few of them to start.

One more thing: Crypts will often melt when water conditions are switched. Don’t worry about it, just remove the dead matter as it falls off the plant and allow the new leaves to re-establish. They’ll thicken back up again within a couple of weeks. 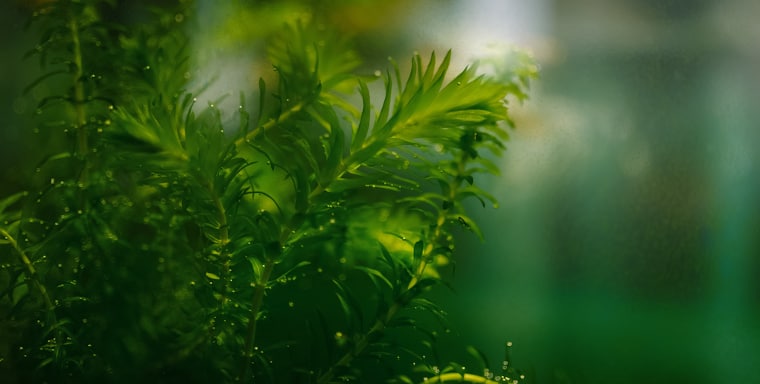 Like the idea of a drop-in nutrient soak and cover but don’t want to deal with never being able to remove it? Anacharis, or Elodea densa, is perfect. It grows well, consumes tons of nitrates, and doesn’t care about water conditions in the slightest. If it’s wet and there’s light, it’ll grow.

Anacharis can be planted in the substrate or floated along the surface of the water. The plant really doesn’t care where it’s at; it’s going to thrive. It doesn’t grow as quickly as Java Moss, but growth rates of an inch or more per day aren’t unheard of. That really adds up when you begin to chop up the stems.

In brief: it’s nearly impossible for Anacharis not to thrive in any tank shrimp are in. High lighting is ideal for this purpose, as it causes the plant to grow more tightly. But even in a low-light tank, it provides a lot of cover for your inverts.

Anacharis is one of those aquatic plants which can be considered invasive, so dispose of the extra responsibly. That said, it’s another excellent plant for shrimp tanks, especially if you want to perform minimal maintenance. 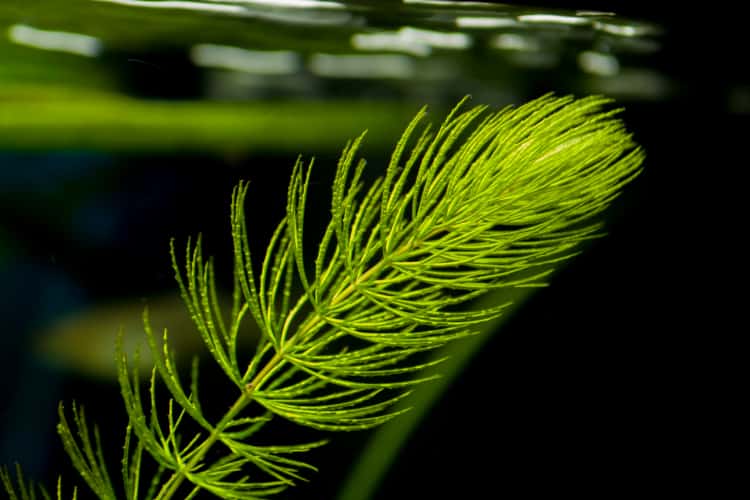 Think Anacharis is too plain? Hornwort has pretty much the same requirements for care. That is to say: it needs to be wet. Instead of Elodea’s denser structure, however, Hornwort has light needles.

Hornwort is a bit touchier, however, and the needles tend to drop off if the plant has any issues. They’ll regrow quickly, but it causes a serious mess.

It’s a great way to spike your nitrates. While it’s okay for Neocardinia species, I’d avoid it if you’re planning on raising any sort of Bee Shrimp for that reason.

I tend to leave it floating in tanks. I’ve found that it will rot out below the gravel level and still end up floating within a couple of weeks to a month of “planting.” As an early nutrient sink, it’s great. As a permanent fixture, I don’t care for it.

Personal feelings aside, the structure of the plant lends itself well to protecting shrimp fry. In breeding tanks, you can just cut trimmings and throw them in for a ready-made shrimplet shelter. It’s a good addition for most people, just keep the gravel vacuum handy if it begins to drop leaves. 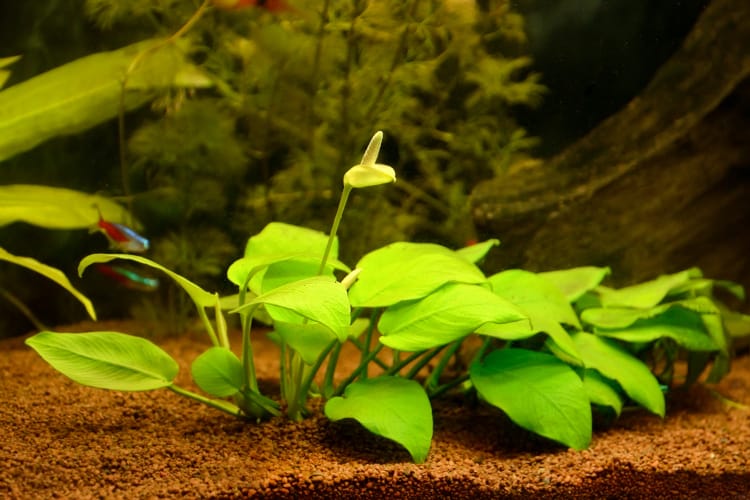 The easiest and most common of the various Anubias species. The petite version of Anubias barteri is an excellent plant for shrimp. When established, it provides a dense, hardy layer of foliage that’s hard to beat.

For most aquarists, the problem is just getting there. They’re prone to problems in the inexperienced aquarist’s hands, especially those who invested in a ton of equipment.

The reason? In mid-to-high lighting, it’s prone to algae. And it sure does seem to gather algae; the various specimens I’ve had over the years often seemed to collect more than one at a time! Brown diatomic algae, hair algae, and green spot algae all seem to come with the territory.

Keep your Anubias under low lighting or in a shaded area in the tank. Don’t fret if the initial leaves take some “hits” from algae, either. The new ones will grow in eventually. They get seriously ugly if you let things go, however.

Anubias mostly take consideration in placement. Given that? They’ll do fine, just be aware they’re very slow-growing plants and it can take months for them to establish and fill in an area. 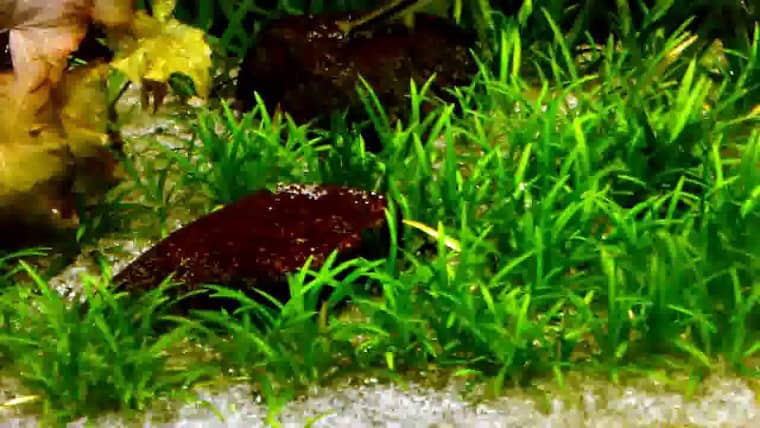 Dwarf Sag is one of my favorite foreground plants in shrimp tanks. That said, it’s a bit too much work for breeding colonies, in my opinion. If you’re willing to put in the work, however, it’s perfect for a presentation tank that has shrimp.

Dwarf Sagittaria is mostly used as a carpet plant. With careful consideration of the other plants in the tank, however, it can also be used in the mid-ground of smaller tanks. It reaches a height of 4-6″, but most aquarists keep it trimmed down to 2-3″.

The only real issue is that it’s very iron-hungry. Supplements are required. Watch the leaves’ color. If they’re yellowing, then you’ll need to add iron. Do that, and everything else is easy enough.

Dwarf Sagittaria will quickly fill in once established, throwing out runners. I tend to plant it very densely, leaving only ½” between basal rosettes, to create a lawn in the front of tanks. Others will let it grow long. It’s a versatile plant in that regard. Give it a shot if you’re ready to put in a bit of extra work.

You’ll need a different species of Val for any tank under 20 gallons. Jungle Vals are rather large but allow you to make even a background safe for your shrimp.

As a bonus, it grows well along the surface of the water. Using it to create shade for mounted Anubias is a great idea, especially for larger varieties that won’t do well in the foreground of a tank. It’s almost a floating plant in that regard, and it can get quite massive.

All Vals are great for shrimp, but Jungle Vals offer an excellent, secure home that can go in even the largest tank. It’s a great feather to have in your hat if you want a clean-up crew in a larger tank.

Not all of the great shrimp plants are easy to care for. Dwarf Hairgrass isn’t exactly newbie-friendly, but it’s fantastic when you’ve got shrimp involved. The tight, small grass can keep your shrimp safe from all but the most voracious predators.

I’ll be the first to say this: Dwarf Hairgrass isn’t great under low lighting. It takes a considerable period to root, and it will grow slowly… probably more slowly than the algae which will cover it. Slow growth is just a recipe for disaster, even with tougher plants.

So you need to keep it under at least 2 watts per gallon, or buy a lot of it and plant it thick in the first place. Root tabs are also a requirement for success, even from the beginning. A good substrate only goes so far when it comes to promoting dense growth.

CO2, good lighting, and heavy fertilization in the substrate will make this plant thrive. In this case, it will grow quickly, spread across a tank’s bottom, and generally act like grass instead of sparse rosettes.

The dense nature of well-grown Hairgrass is what you’re looking for with shrimp. Give it a skip if you don’t have the equipment for it, but if you do, then it’s a defensible and attractive carpet that’s perfect for your dwarf shrimp.

Marimo Balls are an excellent way to cover up parts of the foreground without having to go with a carpet. They’re easily moved, don’t require a specialized substrate, and are generally a no-fuss plant.

These balls are actually a natural curiosity. They’re a form of algae that occurs in specialized conditions that are only found in a couple of places across the world. They can be propagated in captivity, and often are, but it’s a slow process.

They can get expensive if you want to fill a large area with them, so I recommend keeping things nice and small. Limiting them to one area of the foreground is a good idea.

When it comes down to it… they’re small, provide food, and catch particles. They’re not the best shelter available, but shrimp seem to love them, so give them a shot. The unique shape and deep coloration is a bonus in any tank.

Your shrimp need plants. The best are those which provide cover and grow easily in the same conditions, but nearly any plant will do. The above selection should be enough to get an aquarist of any level started, so… are you ready to start making your aquascaping work for your shrimp?