From estuaries to mangroves, the world of brackish fish is much deeper than many people realize. Whether it’s a biome tank or just a fancy house for some Fiddler crabs… what we do know is that they’re awesome. If you’re looking for some stocking ideas for a brackish tank, you’re in the right place. Let’s dive in with some of my favorites before giving you some advice on these in-between tanks. 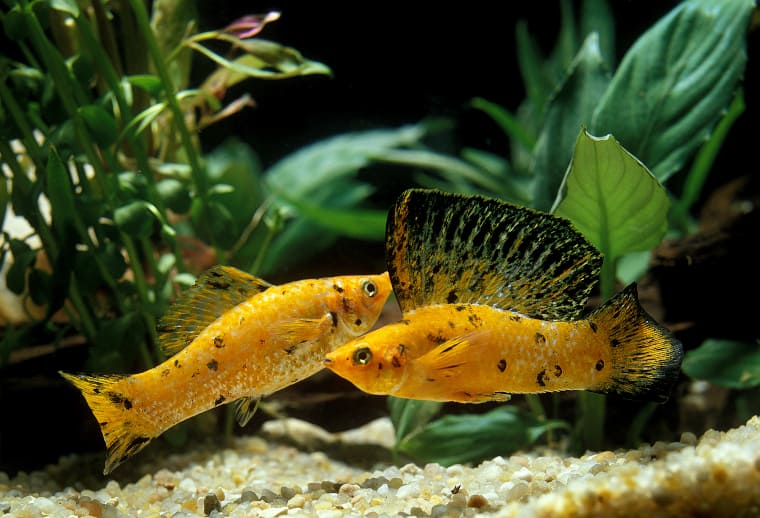 Most people don’t realize that the humble Molly is actually a brackish fish. Or, more accurately, they live pretty much everywhere in the wild. For a brackish tank, they’re the ideal schooling fish, allowing you to fill in any gaps that might occur.

Due to their environmental resistance, Mollies are very hardy fish and readily breed with no special conditions. The sailfin variety is a bit larger, and there are many color morphs available.

There is also a “balloon” morph, with a cartoonish body, but they’re quite deformed and don’t live as long as healthier varieties. Cute, but the chosen gene is actually a big quality of life issue for the fish.

Still, their ability to survive in any water conditions and their lively, active nature make them an excellent beginner fish. For those starting with a brackish tank, I can think of no better recommendation. 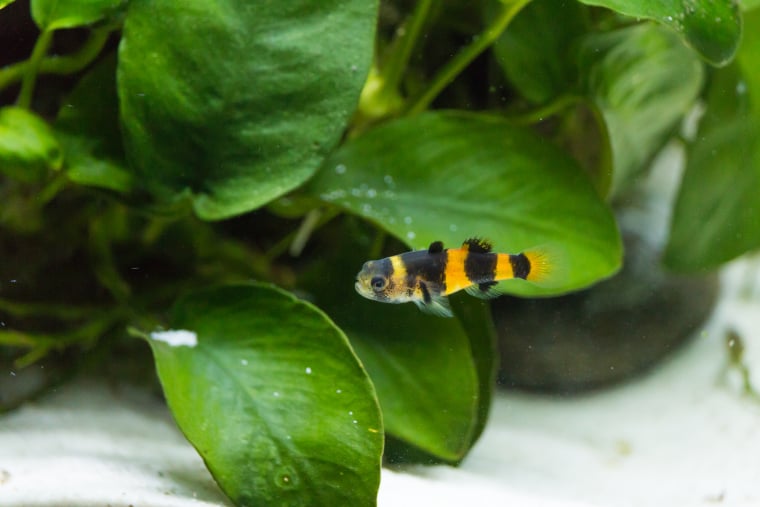 Not all Gobies are marine animals, and many of the interesting brackish fish happen to fall in the family. They’re all very remarkable in some way, but the Bumblebee Goby sticks out by being a tiny, brilliantly colored fish.

They’re remarkably undemanding in care. They’ll easily adapt to most salinity levels, and they’re not all too picky about water requirements either.

There is one small problem some people face: Bumblebee Gobies tend to be picky eaters. Flake is right out, and so are pellets most of the time. That means frozen foods or live ones are your best bet, the latter being preferred.

Fortunately, it’s cheap to buy a brine shrimp hatchery to maintain their health. That said, I’ve never had problems with feeding them frozen bloodworms: just make sure that their tank mates aren’t devouring it all first. 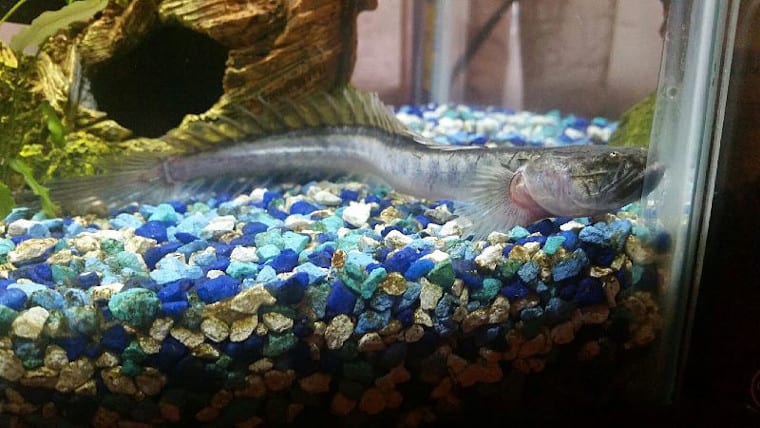 Perhaps the oddest looking fish around, the Dragon Goby is an excellent way to get a unique fish in a brackish tank. They’re actually relatively peaceful, considering their fearsome appearance. This is due to a small throat, at least in relation to the size of their mouth.

Feeding is the main problematic thing about keeping one of these fish. Newly imported specimens are often extremely picky, and they often starve in less-than-expert care. Fortunately, most are captive-bred, but these too have their own special problems.

The Dragon Goby has bad eyesight in addition to their small throat. I’ve found the best way to feed them is a few minutes after turning the light off. You can also spot feed them if you have the equipment and time.

However, if you’re up to the challenge, these fish get large and remain impressive throughout their lifespan. They’re one of the most unique fish available. Despite their bottom-dwelling tendencies, they are a delight to observe regularly. 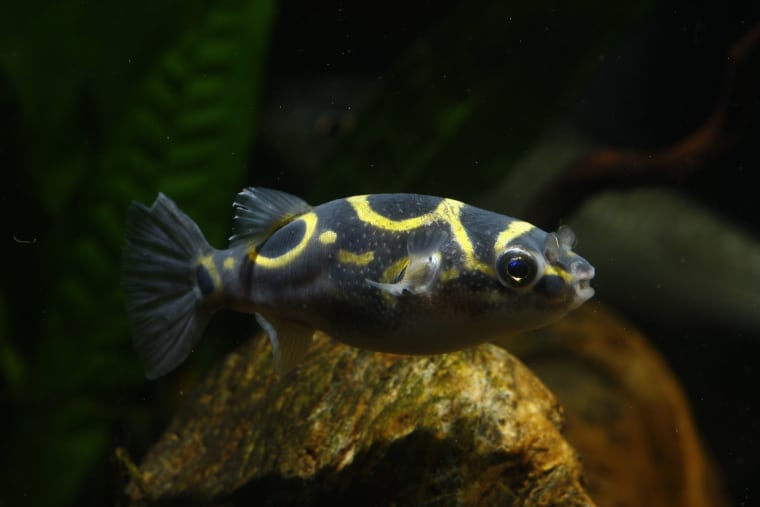 One of the smaller puffer species available, the Figure 8 Puffer is a colorful, lively addition to a brackish tank. They’re true brackish fish, so a good level of salinity is required to keep them healthy.

Note that these voracious predators have a smaller cousin, the Pea Puffer. Unfortunately, Pea Puffers are one of the few true freshwater puffers available. Make sure you know the distinction before you decide to bring home a puffer. Figure 8’s are often sold at smaller sizes and are sometimes mistaken for Pea Puffers.

They’re easy to feed. A bit too easy, perhaps, and they shouldn’t be kept with mollusks or crustaceans of any sort. At least if you’re planning on keeping them around, it can be a joy to watch them hunt snails or ghost shrimp on occasion.

Puffers are rather intelligent fish and display their own personalities. Be careful about keeping them together as well; they can be quite territorial. If you have the right tank, however, a Figure 8 is a semi-aggressive addition you won’t regret. 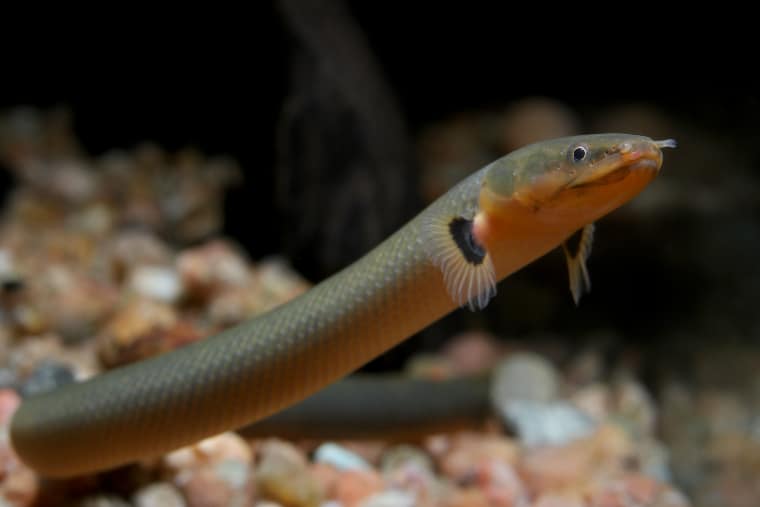 The Reedfish is my favorite brackish oddball. They’re sleek, snakelike fish that belong to an ancient order. They actually breathe air, which is the main problem of their care… like all eel-like fish, they’re often adept escape artists.

Reedfish are voracious. They’re usually not picky eaters in the slightest. Bloodworms and frozen brine shrimp are usually enough, but live foods may be required depending on the individual fish. Because of their appetites, they’re messy eaters, so expect a lot of water changes over time.

There is something else to keep in mind: despite their ability to live in brackish water, they’re not good with high levels of salinity. It’s best to keep them on the lower end of salt saturation for their health. They do live in brackish estuaries in the wild, so this isn’t a case of them just being hardy.

Their appetite, unique appearance, and lively nature make Reedfish an amazing addition to a brackish tank. You just need to be sure that it’s the right one, as they’re not super compatible with some brackish critters which require near marine levels of salt. 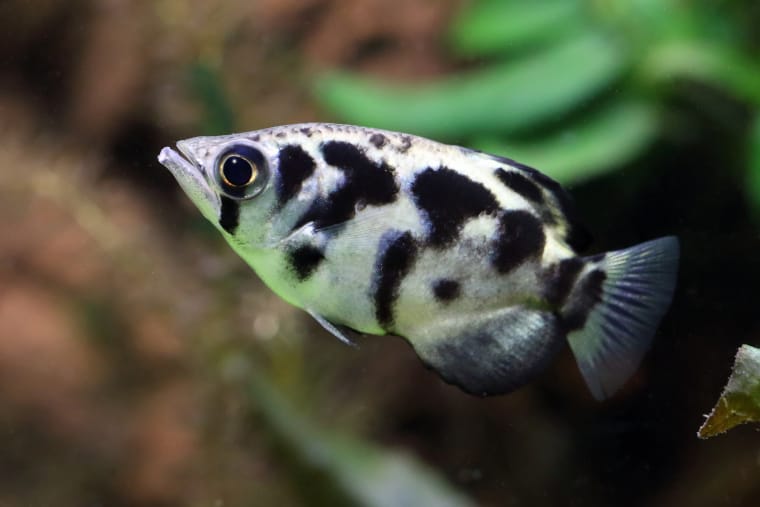 The Archerfish isn’t particularly unique in appearance. The commonly found silver-banded Archerfish isn’t as iconic as many of the rainforest fish that it shares its natural home with. What is unique is their method of feeding.

In the wild, Archerfish shoot down insects with a stream of water. In captivity, they’ll repeat the behavior, but it has to be carefully controlled since they’re also prolific jumpers. Take precautions and you’ll be fine on that front.

Archerfish require a lot of room. They’re rapid swimmers, and a long tank will provide them with a much better experience. You’re looking at 50 gallons or more just to keep a trio, and you can’t really go smaller for just one fish. They just need the room.

They’re hard to care for, but they’re a rewarding challenge for many. Read up extensively before you decide they’re for you. Archerfish are well studied, and good information is easy to find, but it takes a lot of work to keep them in a thriving community. 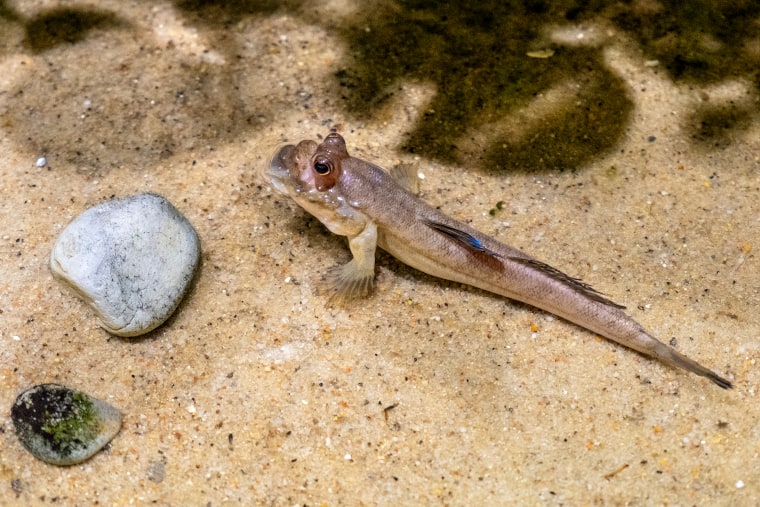 Technically, Mudskippers are vivarium fish, but they’re far too unique to pass up. They’re a subspecies of Goby, and their lively nature and unique behaviors are incredible to behold in captivity. You just need to be sure that you can pull off their environment.

You need landmass for mudskippers to be happy. That can mean a raised substrate, a turtle dock, or even just a pile of rocks. Ideally, you’ll have 50% of the surface area of the tank as land. Paludariums are often kept brackish, especially for those who like to keep Fiddler crabs, so it’s not a huge departure from a regular aquarium.

The care part can become complicated. Most Mudskipper species should be kept by themselves. They tend to infight when crowded into a tank. They can share the tank with small schooling fish, Fiddler Crabs, and most Gobies. However, I would advise against keeping them with puffers as they can do a lot of damage with their beaks during disputes.

Mudskippers are probably the hardest brackish fish to keep. They need their own dedicated tank, some specialized knowledge, and an experienced keeper to thrive. However, those who’ve kept them often find that it’s one of the most rewarding aquarium experiences possible.

Caring for Your Brackish Fish

Brackish tanks aren’t much harder to keep than standard freshwater tanks. While many of the fish require specialized care, the tank itself only has one more major variable added.

Salinity levels in a brackish tank are measured in SG, or specific gravity, and you’ll need a salinity meter to check. Brackish environments are located between marine and freshwater environments. That means the specific gravity of wild waters can vary throughout the day.

In general, you want your water at 1.002 to 1.020 SG, which is a good range for the majority of brackish fish. It will fluctuate with time, so keep an eye on it by checking regularly.

In general, the rest of your maintenance is no different. Just add salt when you’re doing a water change. If you are just topping up your tank, don’t add more salt as it will cause the salinity levels to rise. The water has evaporated… the salt is still in there.

The real challenge is the size that most brackish fish reach. You need a larger tank, on average, than you would for a freshwater setup.

Don’t be discouraged if you’ve never done it before. Running a brackish tank is much closer to a standard freshwater tank than creating a marine environment like you would for saltwater.

There are quite a few biomes that can be created with brackish water. Mangroves are perhaps the most common, but there’s a lot out there if you care to look. Some people even mimic their local brackish habitats.

Traditional aquascaping is a bit harder. You’ll be greatly limited in your plant choices in particular. The following will usually work:

Anything else is really up in the air. Stem plants like Ludwigia and rosettes like Echinodorous species are right out, as are the majority of carpeting plants.

Still, not all is lost: rock piles are a great way to fill the tank, and with a higher pH, you’ll have a greater choice of rocks over time.

Many people are fond of keeping things like crabs in their brackish tanks. It really does open a whole new world of non-fish species.

The following are all good choices for brackish beginners:

There are countless other species available if you care to take a deeper look, but the above are all beginner-friendly. Remember to not just assume a crab(for instance) is brackish, some are full freshwater and will suffer from a brackish tank.

The salinity does make the tank unsuitable for many species of invertebrates. In particular, Cherry Shrimp and all varieties of Bee Shrimp will fail to thrive or die, if placed in a brackish environment.

Some Sweet Fish for a Salty Tank

Brackish tanks are an excellent way to expand your horizons in aquaria. Whether it’s for a specific oddball or just the challenge of keeping another variable in check, finding the best brackish aquarium fish is a simple matter. The truth is that you can get some sweet fish for a tank that’s a bit salty.