Tiger Barbs are a lively addition to any tank. They’re also likely to bully, or even kill, other fish if you’re not careful about who goes in with them. Fortunately, there are a wide variety of animals that combine well with these energetic little predators. Read on, and I’ll show you some of my favorites and help you make the right decision with those I didn’t include. 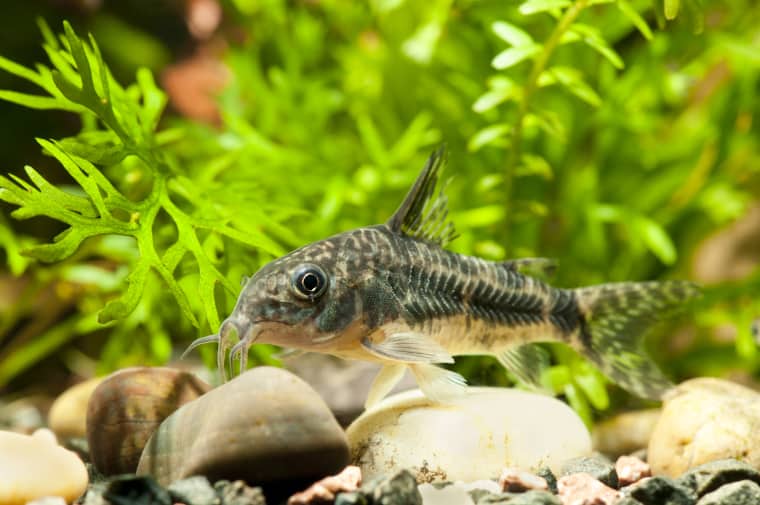 Corydoras catfish are one of the most versatile of the common suspects in these lists. The truth is that they’re fine with most things that won’t swallow them whole since they’re armored and stay on the bottom. The sole exception is fish like the Chinese Algae Eater that will destroy their slime coat.

They’re the perfect mix for Tiger Barbs, both aesthetically and due to their armored nature. They’re roughly the same size as Tiger Barbs once full-grown, easy to care for, and remain at the bottom of the tank.

They’re extremely easy to care for, even for a catfish. Corydoras Catfish tolerate most water conditions, resist attacks with their armor, and are generally easy-going fish all around. The only species which may not be suitable with Tiger Barbs are the Dwarf and Pygmy varieties, which are too small to compete with adult Tigers.

If you look around, you can find the right species for your tank. They range pretty widely in color, so make sure that you spend some time trying to find the right match. They’re even still finding new species if you’re willing to look for the right salesman.

Learn more: 8 Enchanting Types of Cory Catfish For Your Aquarium 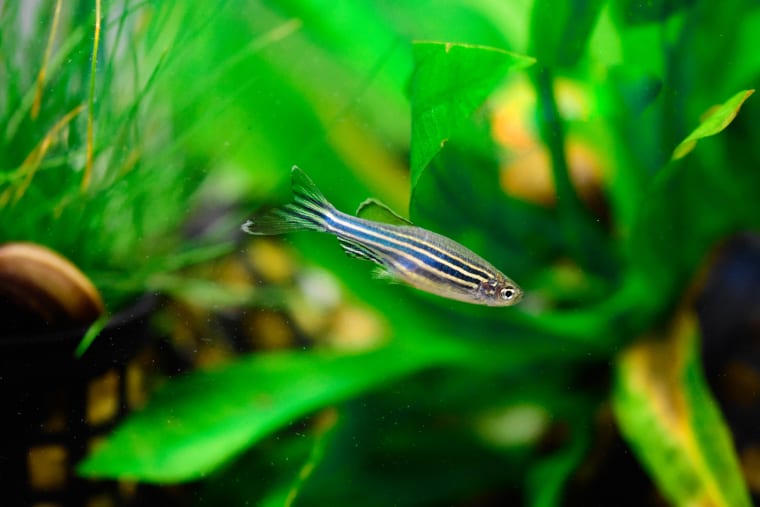 Zebra Danios are fast, agile, and a perfect match for Tiger Barbs. They’re playful, energetic, and add a lot of motion to any tank. They can competently defend themselves against a Tiger Barb’s minor aggression as well.

There is an exception: longfin Danios are not compatible with Tiger Barbs. Or standard Zebra Danio in some cases. The long fins of the longfin variety are perfect for Tiger Barbs to rip on, and they’re slower than a Danio with natural fins. That makes them a target and removes their primary defense.

They’re one of the basic fish. Feed them flake, make a tidy home environment for them, and they’ll thrive. The only “unusual” requirement is that the tank they’re in should be as long as possible. 24″ is doable, 36″ is better, and 48″+ is ideal.

The astute will note the genetically altered Glofish are Zebra Danio. And they’re also compatible if you want a great splash of color.

These zoomy little critters are one of my favorite tank mates. They’ll be able to safely interact with the Tiger Barbs for the most part, and they have a lot of personality despite their small size. 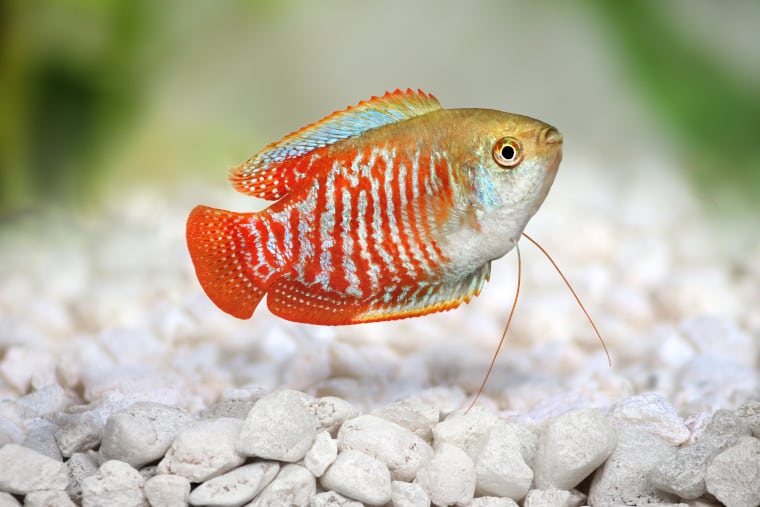 Dwarf Gourami are a great match with Tigers. They’re semi-aggressive on their own and don’t have flowing fins for the Barbs to attack. Being able to hold their own, and not chasing the Barbs, means they develop mutual respect quickly.

Dwarf Gourami come in a few different colors, but the majority are red and blue. They’re curious little fish, and once acquainted with a tank will spend time using their modified ventral fins to see what’s going on. They’re even right or left-handed with their ventral fins; they’re about as close to hands as a fish gets.

Their care level is low. Dwarf Gourami can compete for food with the Barbs at the surface of the water, and otherwise, they just need the basics of a clean tank and substrate. However, you may want a few decorations to break the line of sight, or you’ll face some aggression problems.

Like Betta, Gourami are intelligent fish and all have their own personalities. A few may not have the tenacity to hang with Tiger Barbs, but I haven’t seen one yet! 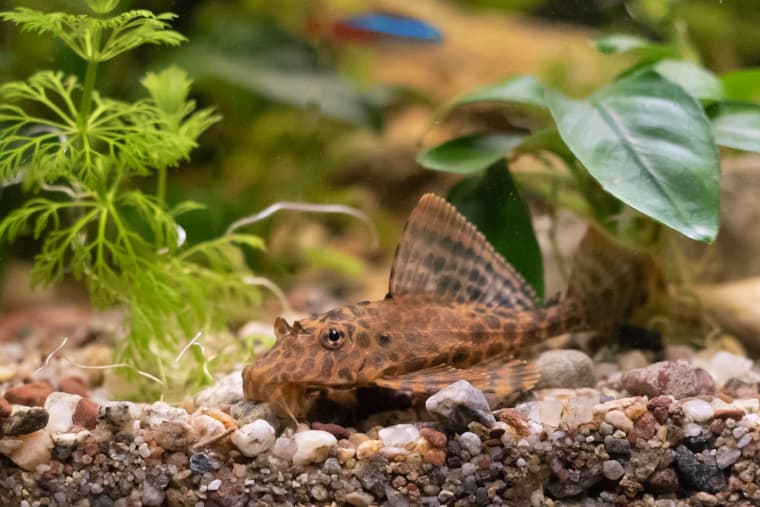 Plecostomus have all of the desired qualities for a Tiger Barb companion. They’re tough, strong, and prefer to hang around the bottom of the tank. Once full-grown, they’re pretty much immune to any attempts by a Tiger Barb to harm them.

There are many species of Plecostomus, but the most widely found is the Common Plecostomus. They will reach at least 12″ and can get much bigger if fed well from a young age. That means they’re only suitable for larger tanks.

Sailfin Plecos are another good option. They reach roughly 6″ and are suitable for smaller tanks.

All Pleco species prefer fast running water, just like Barbs. Tiger Barbs can be messy eaters, making a Plecostomus even more attractive as a companion. They’re my preferred cleaner for any 40 gallons or larger tank. Their wide compatibility with other fish also means they won’t limit future fish additions.

They’re a staple of the trade for a reason, and they’re very useful fish. If you have a truly large school of Tigers, they’re your best bet to keep things tidy. 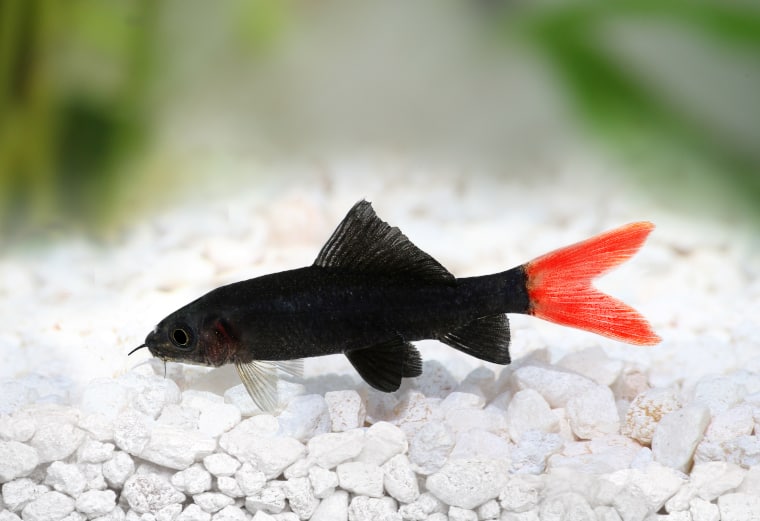 Red-Tail Sharks aren’t related to their marine namesake. Instead, they’re actually a carp! Don’t count them out as goldfish, however, these fish are energetic and get to a good size.

Their size is their primary defense against Tiger Barbs, although they can hold their own while smaller. There is one thing to note: Red-Tail Shark should be kept singly. Otherwise, they can become very aggressive with their tank mate.

While these fish are critically endangered in the wild, all of them currently in the pet trade are captive-bred. So no worries on that front, indeed the only Red-Tails left in another decade or so will be those in fish tanks unless there’s a massive change.

Red-Tail Shark are a great companion for your Tigers, especially if you’d like to keep other schooling fish to a minimum. 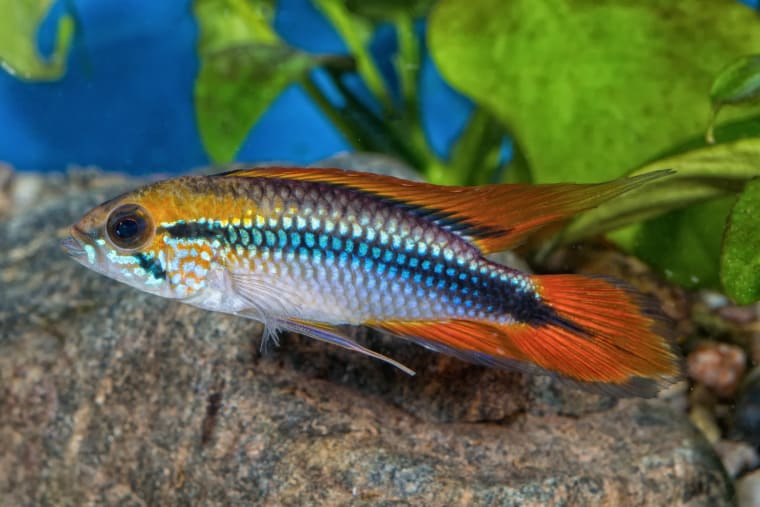 Agassiz Cichlids are all peaceful dwarf cichlids. They’re still cichlids, however, so they don’t fit in most peaceful tanks. Combining them with your Tiger Barbs, on the other hand, is an excellent idea. Matched aggression levels usually end up with far fewer problems.

Like all cichlids, you need to make sure there’s a place for them to lair. They’re sexually dimorphic, which is a bonus for you. Try to avoid placing a breeding pair in the tank. They’ll become extremely aggressive with other fish after mating.

On the other hand, they’re great on their own as long as they have a hiding place. They’re a bit more difficult to keep than some fish on this list, but anyone with cichlid experience will be fine.

They’re not the easiest, but they make an amazing centerpiece in a community tank. If you’re up for the challenges of their care, then they’re one of the best tank mates for your Tiger Barbs. 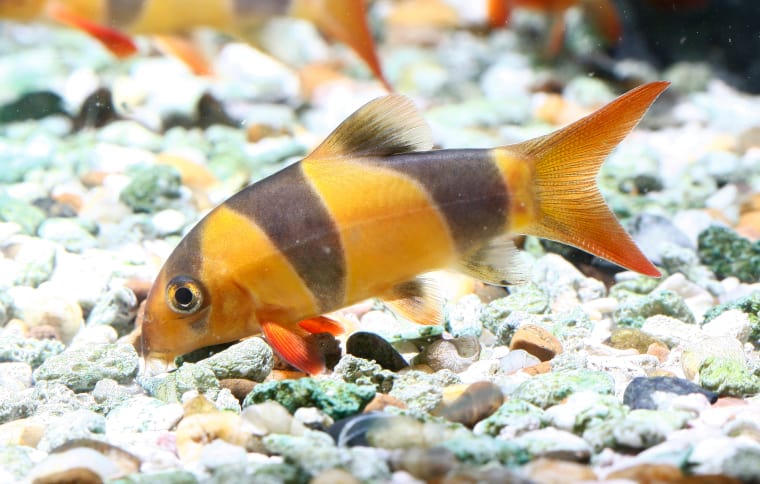 Clown Loaches have the size and temperament to deal with their Tiger Barb tank mates. The only problem is that they’ll be stressed if not in a group of three or more. Actually, five is preferable, but a trio is viable in most tanks.

That means they require quite a bit of space. They’ll hang around the bottom eating for the majority of their time in the tank, and they’re efficient at sorting detritus. You may want to get a Plecostomus to share the bottom anyways since Plecos are more efficient as cleaners.

As display fish, they really shine. They’re colorful and active for bottom dwellers, and they’ll rarely be in contact with the Barbs.

Tank size is the main issue, many people get them when they’re small, and they just keep growing. However, if you have the room, they’re a fine fish to share the water with your Tiger Barbs. 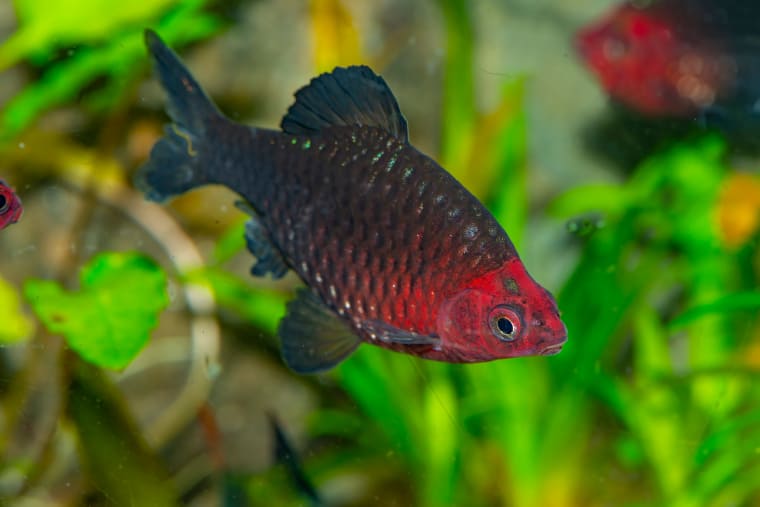 Think about a sea of scintillating fish, with two schools of separate colors. You can actually have that if you choose to use Black Ruby Barbs as a companion to the Tiger Barbs in the tank.

Their care is identical to that of Tiger Barbs as well. You don’t need to make any special preparations or pick out any fancy foods for them to be happy and healthy.

They’re my top choice for a display tank where the emphasis is less on the fish. They provide an excellent contrast to the Tiger Barbs natural color, and an even better one if you’re caring for Emerald Tiger Barbs.

These similar-looking cyprinids are a welcome addition to any semi-aggressive tank hosting Tiger Barbs. The similar look is great, and the contrasting colors provide a welcome aesthetic to your tank. 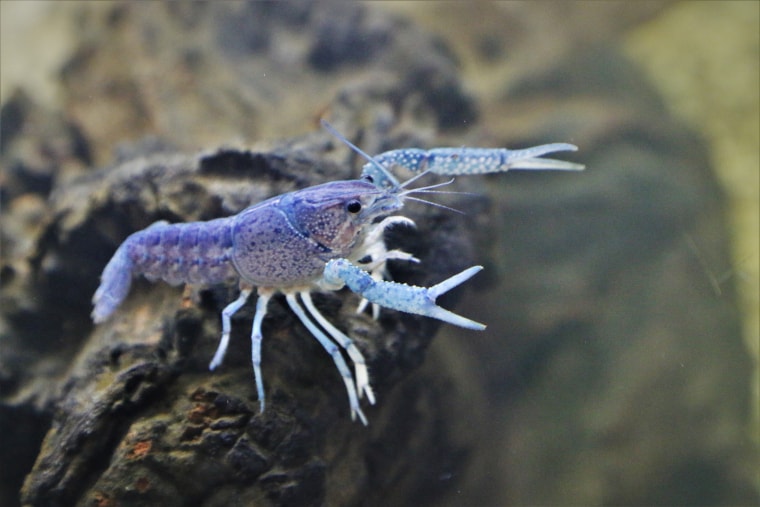 Not all great companions are fish. Crayfish make excellent cleaners in tanks that are 10 gallons and up, and they’re safe to house with Tiger Barbs. They just can’t catch them, but adding a Crayfish will limit your other options.

The only problem when it comes to keeping them with Tiger Barbs is ensuring they’re eating. Tiger Barbs swarm during feedings, and a Crayfish won’t survive on the occasional pellet or bit of flake that makes it through the school.

Instead, you should feed them with a turkey baster or aquarium feeder. Food like bloodworms will be well received. Even better? Crayfish will choose a cave, and you can inject their food directly inside during the day while they’re hiding.

Crustaceans are always a hit, and Crayfish have the right habits and size to coexist with Tiger Barbs. Their care is a bit more than most, but the average aquarist will readily catch on.

How to Choose Tank Mates for Tiger Barbs

Tiger Barbs are a bit harder to pick companions for than most of the schooling fish found in stores. This is due to a few things:

So, you need a few desirable qualities in the fish you’re looking at. You may want to be careful about who’s opinion you take. While writing this article, I found some serious errors being promoted around the internet:

Just be wary when taking recommendations online, even from us.

When kept in schools, Tiger Barbs tend to be less aggressive. Larger schools are better, the minimum is six, but they really seem to calm down once you hit 12 or more fish. So, any fish which is kept with Tiger Barbs needs the following:

The largest problem with Tiger Barbs is undoubtedly fin-nipping. This can lead to stress and death in other fish if not kept in check. The best way to do that? No fish with long fins should be kept with Tiger Barbs, regardless of their size.

The other problem is feeding. Just make sure your fish can compete at the surface or find a way to feed them somewhere else; otherwise, they may starve. Few small schooling fish churn the water as much as a feeding school of Tiger Barbs.

That also means any veil-tail or longfin variations of other fish are a no-go. Arthropods are a bit easier to pick.

Tiger Barbs are only a danger to dwarf shrimp and tiny snails for the most part. Small freshwater (not brackish) crabs are a decent choice, but require you to make some land area for them. Crayfish and other freshwater lobsters are much better in this regard.

Just follow the above guidelines, and you’ll do well in your choice.

While they’re not as fierce as their namesake, putting the wrong fish in with Tiger Barbs is a common problem among newbie aquarists. As long as the fish can compete for food and resist their attacks, you’re in good hands. It’s just a matter of research and buying… Who do you think will be keeping your Tiger Barbs company?