Rasboras are a common schooling fish, and some of the species are staples in the aquarium trade. They’re generally easy to care for, and there’s a lot of types of Rasbora. Each has its own quirks, but let’s get started with 7 of my favorite species, and we’ll show you how to take care of each! 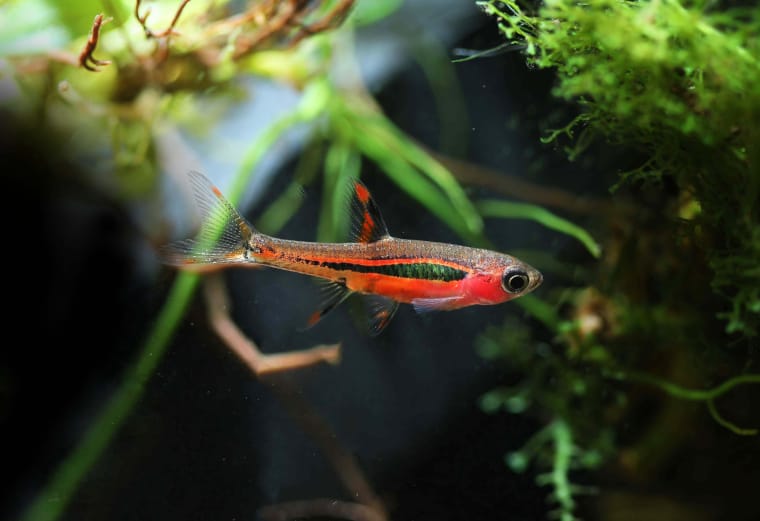 Chili Rasboras are a tiny species with brilliant coloration. They’re fairly active fish and shoal together well. I’d recommend them to anyone who thinks they need schooling fish in their nano tank, especially if you want a splash of color on your plants.

They’re best kept in groups of six or more, but they make a pretty impressive display in larger tanks if you have enough of them. Their shoaling behavior really takes off when there’s 20 or more in a single tank.

They’ll eat just about anything but algae wafers. They’re a micro predator in the wild, eating small bugs and other crunchy offerings that their native streams have. Fortunately, you can supply them with fish flakes in an aquarium environment.

Chilis are an excellent addition to small tanks. They don’t require any additional care, and they’re one of the few available fish which can fit an actual school in a micro tank. 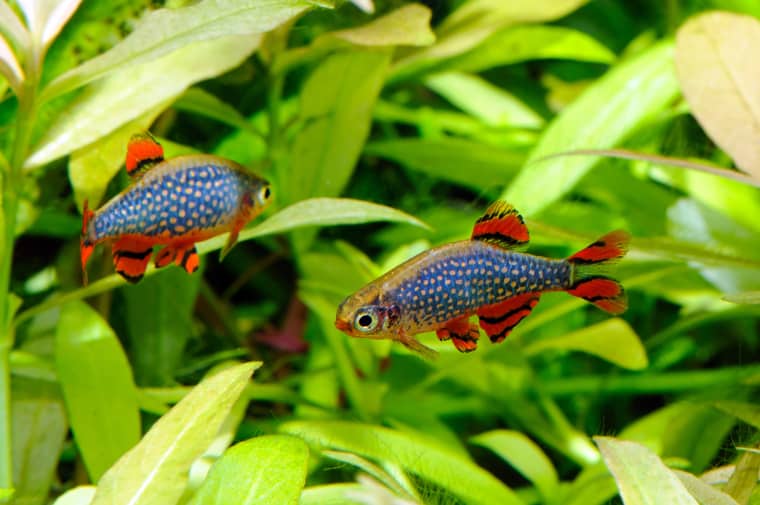 Also called Celestial Pearl Danios, the Galaxy Rasbora is another fish suitable for micro tanks. They’re a new addition to the aquarium trade, having been discovered only in 2006. There’s still some debate over the actual family they belong in, but they’re gorgeous little fish so let’s proceed.

Galaxy Rasbora are a bit bigger than Chilis, reaching up to an inch at maximum. Because of that, it’s best to keep them in a tank of 10 gallons or more, but a trio can make be safely kept in desktop tanks.

They have a voracious appetite and do well in most water. Despite lacking a long history in aquaria, they seem to do well in any non-extreme environment. Their size can make them hard to keep in community tanks, but they get along with most fish that can’t eat them.

Despite the controversy, these fish are one of my favorite Rasboras. They’re relatively easy to find, and their spotted sides and red fins are unmistakable.

Blackline Rasbora aren’t as common as they once were, but they still make excellent shoaling fish in the right circumstances. They’re a lot bigger than the previous ones on this list, but a small group can be kept in a ten-gallon.

Blacklines are more subdued than most popular fish, which is one reason they’ve fallen out of favor. For natural-looking tanks or just those who prefer a plainer fish, they’re a solid choice.

Their schooling behavior comes out. You end up with a wall of shimmering silver much greater than the individual fish.

They’re easy to care for. Like other Rasboras, they’re micro-predators. That means you can feed them anything but algae wafers, and they’ll quickly chow it down.

While they’re not the flashiest fish, Blackline Rasboras are a larger Rasbora, which schools well. If you want something subdued in your tank, get a closer look, and you may find what you’ve been waiting for. 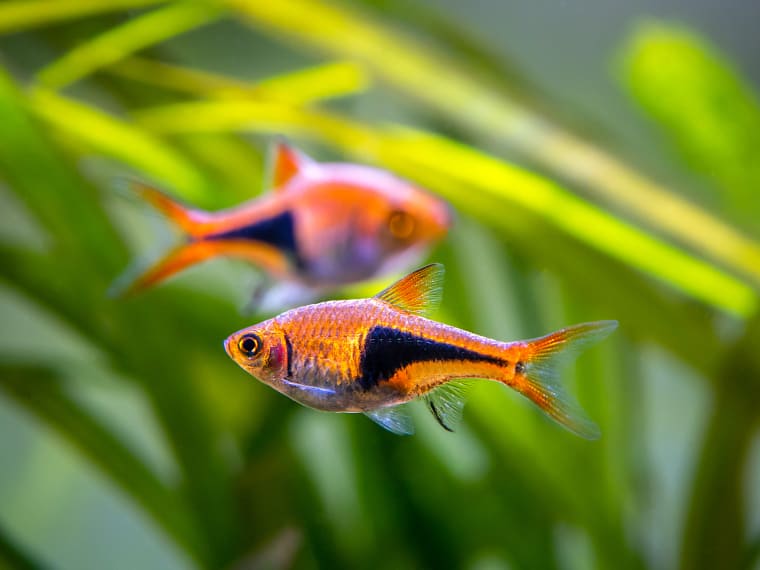 Harlequins are bright schooling fish & perfect for planted tanks in the 20 gallons plus range. Their colorful, patterned bodies are just subdued enough to not steal the show in a large planted tank.

That’s not to say they’re not suitable for small tanks. A 10-gallon tank is enough to support a small school as long as it’s cycled before you add them. Their size makes them especially well suited for community tanks as well.

Harlequin Rasboras don’t have any special care requirements. They’ll eat just about anything, aren’t demanding of water conditions, and are generally no trouble to keep. They do need a peaceful environment. They’re not suitable for tanks with, particularly, boisterous fish.

Harlequins are a commonly seen fish, available at most pet stores. If a small schooling fish is what your tank needs, they may be the answer. 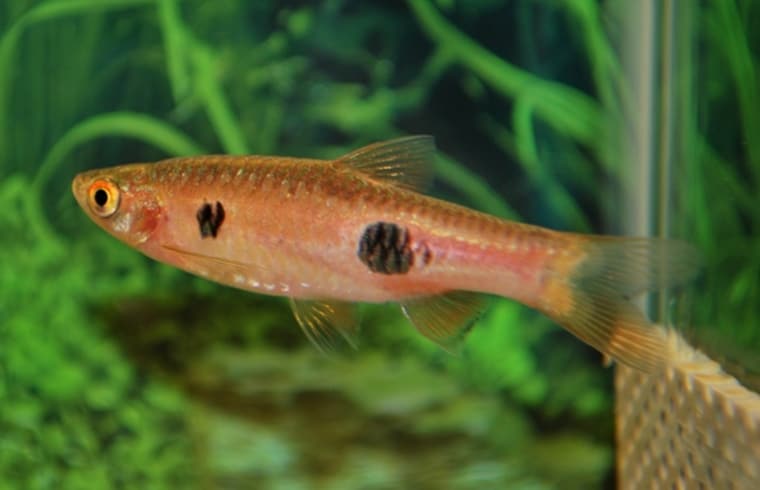 You’re not simply limited to small fish when you’re looking into Rasbora species. The Clown Rasbora is a magnificent red specimen that reaches about four inches in length. They’re still schooling fish, however, so a larger tank is highly recommended.

Clowns do require a touch more care than most of the others on this list. In the wild, they inhabit blackwater streams, which means an acidic and tannin-rich environment. An acidic pH, under 7.0, is required for them to thrive.

Other than that, they’re the usual happy-go-lucky schooler you’d expect. They’re active, complement most plants well. Their larger size opens more opportunities in peaceful community tanks as a bonus.

They’re not for nano keepers, but those with a craving for big schoolers won’t be disappointed. The Clown Rasbora is one of my favorite medium schooling fish, and they’re easy to care for as long as you don’t have alkaline water. 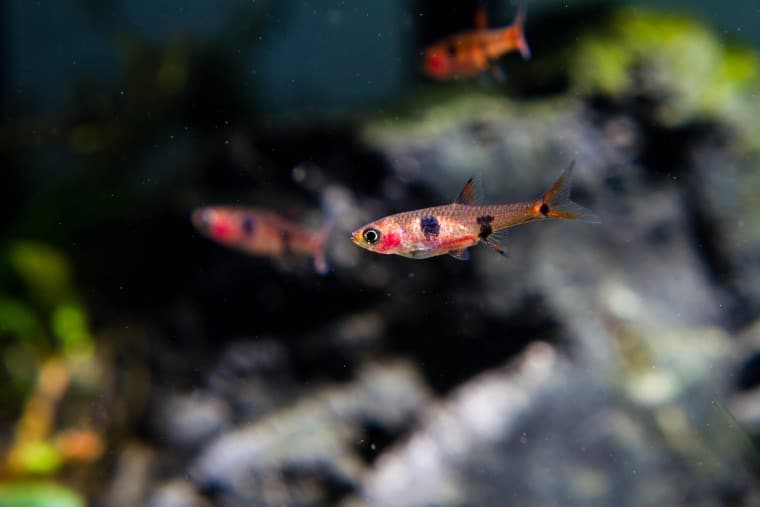 Dwarf Rasboras actually aren’t the smallest of the many species in this family. However, they are comparatively small, and topping off at 1 ½” puts them right on the edge of being an acceptable nano tank fish.

I prefer to see larger groups in tanks of 10 gallons or more, but a small school can be okay in a well-planted 5-gallon tank. Like all of these fish, their school is more impressive the larger it gets.

Dwarf Rasbora thrive in soft, acidic water. If your pH is 7.0 or lower, they’ll be just fine, and the majority of captive-bred fish will do well in any reasonable conditions. Avoid extremes.

Dwarf Rasboras make another good option for those who want small schooling fish. They’re nano-appropriate, but I think they’re best appreciated in larger groups in tanks of 20 gallons or more. It’s your choice, but consider them for any planted tank. 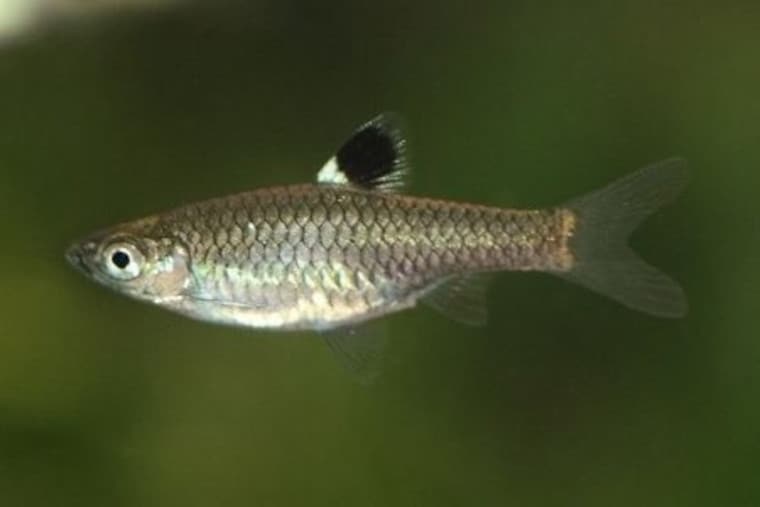 Emerald Eye, or Lamp Eye Rasbora, don’t get enough love. They’re brilliant, silvery fish, but their true colors are hard to capture with a camera. That’s not to say they’re a moving rainbow, but they’re not as drab as the photos in person.

They’re another small schooling fish. They do best in groups of 6 or more, so you’ll want to keep them held up in a 10-gallon tank or larger. Their habitat is actually endangered. Palm oil plantations are encroaching on it, which means keeping captive fish is vital for the species’ continuation.

As far as care… well, they’re like most Rasboras. Feed them anything but algae, aim for a lower pH, and let them thrive. This species prefers lower light, so they’re excellent for low-tech tanks with slow-growing species.

Last but certainly not least, the Emerald Eye Rasbora is a fish that many people overlook. They’re a cool option for mid-sized peaceful tanks. Consider them, especially in low-light situations.

There are many types of Rasbora, and they’re very similar in their care requirements. The real choice falls on you. Find a species that suits your tank and your tastes, perfect for a quick, active school of fish.

So, which Rasbora looks best for your tank?